Somehow though it has crept in. It has crept in and taken hold. The real life issues are squashed to the peripheries. It’s a whole new world I’ve entered into. A dipetane fuelled rev obsessed world.

‘Just mix some dipetane in with your diesel the next time’ the kind man says over the phone when I book in for a pre-test. Ah yes, dipetane. Never heard of it. Didn’t think you could ‘mix’ anything in with the fuel. Surely that’ll cause little explosions or seizures or something untoward.
‘People do it all the time. It’s used on boats an’ all. You can even throw some in with your home heating fuel’ he says. None of these scenarios do anything to re-assure me. I take him at his word, purchase a bottle from him and receive more little pearls in person. 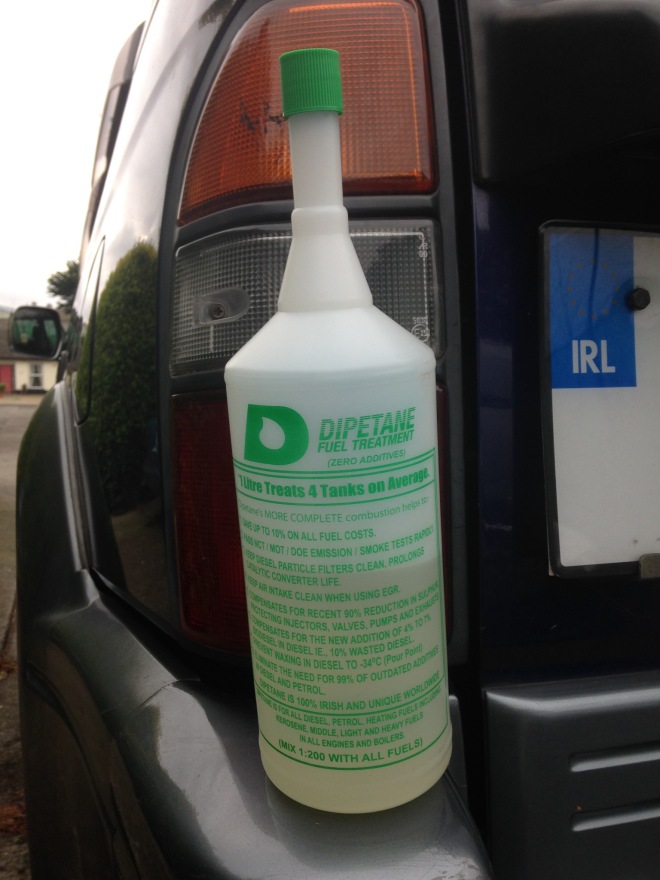 ‘Put in .4 of a litre for a quarter tank. Then drive in low until the revs are up around 3-4000. Then slip it into 2’. I feel as if I should be jotting all this gobbledygook down. I nod sagely instead, repeating all the numbers in my head. I tell him I’ll see him next week for the pre-test.

The eye contact from my new mechanic friend is not so hot after the pre-test. He knows it’s going to fail.
‘It’s very smokey’ he says. ‘You didn’t use much of the dipetane’. Well, I used what you said. Just we didn’t get out that much over the weekend. Vomiting bug and all that jazz.

‘It looks like it hasn’t been serviced in a good while’ my frenemy continues. Ah yes, the old service situation. It’s just that I’ve noticed when I put it in for one, things are found. Hundreds of euros worth of things. What you don’t know won’t hurt you. Or your pocket. I prefer to wait until brought to a halt by something clanging off the ground. Much more economical.
‘If it was my car, I’d put €5 of petrol in the next time with the diesel’, he says without batting an eyelid. Is that even legal?
‘Are you serious? Dipatene and petrol and diesel. Wouldn’t that harm the engine?’ He laughs. Ha, ha. But I have a vague memory of somebody putting diesel into a petrol car and the car going kaput. Paying not too insignificant a sum to get every last drop sucked out. Didn’t seem too funny at the time. It’s the only chance left for getting the smokiness down he says. It’s the last resort. He’s only saying that’s what he’d do. Is all. If it were his. I can take or leave his tip.
‘What if I get a quick service then, would that help?’ and he’s given up smirking at my naivety. The car will fail no matter what. Best to see what they come back with and work from there he suggests. He charges not a cent for his time and tips. Sure I’ll be seeing him directly after it anyhow.

I rev on up to the nearest garage and position myself at the diesel and petrol pump while whipping the dipatene out and plonking it alongside the others. An elderly man and lady pull up behind me in a modest silver micra. He gets their fuel while she gazes unflinchingly at me working the diesel, then swapping to work the petrol which fails because, of course, you have to pay for the one you’ve finished with first. I toss a load of dipetane in instead and feel the poor lady’s eyes widening on me. I think about popping over to her window to explain. No, I’m not in the middle of a nervous breakdown. I know how it looks. Juggling with three nozzles. As if any old thing will do to get this thing moving. I’d frighten the life out of her if I knocked on her window. So I run in to pay the guy for the diesel and back out again to try my luck with the petrol. My lady friend is still there, still staring. What the hell is taking her husband so long? I mix my cocktail, run back in to pay, with a niggle that I poured in too much dipatene for the amount of diesel – should’ve jotted those figures down – and I announce to the nice young dead-pan faced guy that I’m going to get another tenner’s worth of diesel. For the hell of it. Oh, and I’d like to pay in advance this time. I run back out, wrestle with the diesel pump again, ignoring the gob-smacked lady. At last. It is done. I do not expect the engine to start after all the mixing and messing around. But it does. And I drive all the way across the yard to the hoover. The less said about hoovering the thing -which hasn’t been done since the summer – the better. Suffice it to say that there are socks being wrenched back out of the hose. And that one €2 shot doesn’t do it. Not at all. Oh well. It’s the shells that get me. All the little shells of the day from the holidays, filling the door pockets and under the mats.

Sometimes when I open the door a shell falls out at my feet. Brings me right back to the magic of a day at the beach in the West. They must now be hidden in readiness for the silly test. Lest they be deemed a safety hazard. Slip under the brake pedal. Jam the accelerator to the floor. So I busy myself hiding the real life. That’s how it feels as I pull and push the hose around sucking up mountains of sand. Then someone beeps me gesturing to move so he can get past. Some other absent idiot is blocking him but I’m the sitting duck. A busy sitting duck which the rude man chooses to ignore. ‘You’ve got to be kidding’ I find myself mouthing, possibly looking a tad frazzled, waving the time ticking hoover at him. How I wish I was back at that beach.

I finish off my morning at the garage with a manual car wash and a neutradol air freshener. If it smells fresh and looks clean perhaps they won’t notice the plumes of smoke out the rear. I collect the troops from their labours. They admire the new car look. Then I rev off in low, the needle tipping into the red danger zone and we screech all the way home from the school.

‘Go Mum, Go Mum, Go Mum’ the excited chorus chants to the boy racer noises. If that’s all that comes out of this, that’s good enough for me. Rock on 14.20. We’re on our way.