I’m sure there are those of us who realise, with sudden astonishing clarity, that we are, in fact, more than a little bit stressed. That moment came to me recently, and the horror of it was coupled with mirth. Great warbling wads of laughter ricocheting off the garden walls. Anyone viewing me on a web cam would’ve had enough armoury for a commital. What follows is the story of that moment of realisation, written on the day that it happened more than four weeks ago now. A veil of shame has precluded me from being brave enough to post until now. It’s time to publish and be damned.

It’s the day of the last little bits. The niggly left overs. That one book for marque 2 who has started back this morning. The grey trousers for marque 1. Because despite knowing there’s a fairly new pair knocking around somewhere they refuse to reveal themselves. He starts back tomorrow and something is telling me that he wouldn’t be okay with wearing his P.E. gear instead. The way that they dribble back on different days this week has the adrenal glands working hard. It’s like a marathon with little hurdles. Until Thursday. The last great push. There was little sleep last night with the idea of marque 2 bravely soldiering into second year. How would it be with his friends since he didn’t go on the trip to Paris? Would he be left out now? How was he feeling about it all? Was he looking forward to any of it? Did he have a good enough summer? At this stage in the game I’ve picked up enough to know that my own thrumming brain is at best a poor link to anything that may actually be concerning any of them. I do my best to keep my thoughts to myself while remembering that my own mother and mothers of her generation had a healthy distance from us and were not riddling themselves with unanswerable overly intrusive questions. It was all just good enough for us and if it wasn’t, well, they didn’t need to know. So I smile at him, an American beam without the teeth, and ask him who he’s looking forward to seeing most and I manage not to foist an ounce of my concerns on him. He smiles, a natural one, as he lists the boys, and even though some are new to me I do not react. I’m acing this feigned detached parenting lark. I do drop him around to the school though, at his request. The bag on his back, full of the books for the year, is pulling him backwards.

So I should be celebrating. One packed off and happy. But the niggly bits are at me. I won’t relax until they’re bought. I jump through the shower and round up the the younger ones. We’re off to Dun Laoghaire for the last bits.

I bump into a mum from the primary school in the book shop. We natter away as we queue for our orders. I haven’t chatted to her for years. She had a child in marque 1’s year. Now she has two in secondary, like myself, and we discuss the flight of time and she is served as I drift off thinking about whether marque 4 deserves a new school bag at this stage, now that he’s going into fourth, imagine, it seems just like… She’s calling me again then, and maybe has been for a minute as my hearing isn’t the best and she seems to be a little red about the face when I turn back around to her. We chat for another minute before biding farewell and good luck with it all.

On off to the uniform shop then where I perform the height and build of marque 1 for the lady. We talk about how he won’t come with me, wouldn’t be caught dead, and she seems to be aware of this about that age group, but perhaps not how he’d like to know if I’m ‘having a laugh’ when I invite him. She chuckles, redundant measuring tape swinging from her neck as we guess.

I’m back sitting out in the garden. It’s a scorcher. Just as it always is when they return to school. I have a relaxing cup of green tea beside me and the newspaper in my hand. I absentmindedly put my right hand to my hair when I feel them.

‘No-ooooo’ I call out, blushing all by myself, willing it not to be true. Perhaps I tied my hair up since I got back? But this is not the case. My mind freezes as I untangle them from my hair, hoping for the small mercy that they are not lurid pink. Which they are not. Black and lacy and complete with label. It was bound to happen some day. It’s a dangerous habit to turn knickers into a scrunchy to keep your hair from getting wet in the shower. But then you take them out, don’t you? You take them out and you brush your hair and you do your best to find an actual scrunchy if you want to tie your hair up otherwise you leave it down. What you do not do is saunter around your local town, knickers twisted around a bun on your head, label flapping in the wind and catch up with old friends and banter with posh uniform shop ladies. It could be worse I tell myself kindly as the cackles echo around. At least they were laundered ones. 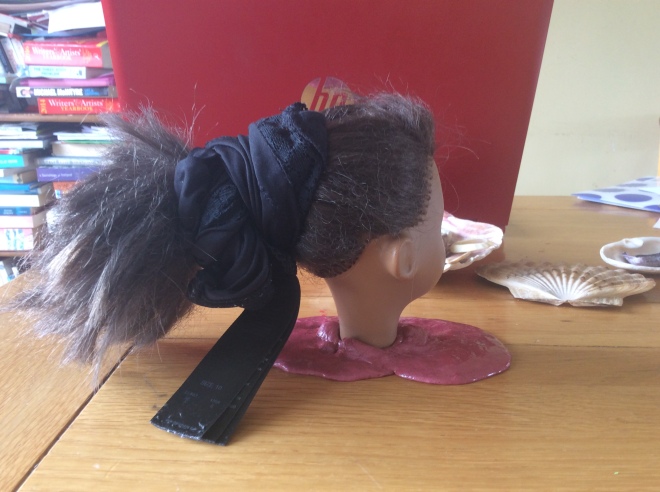