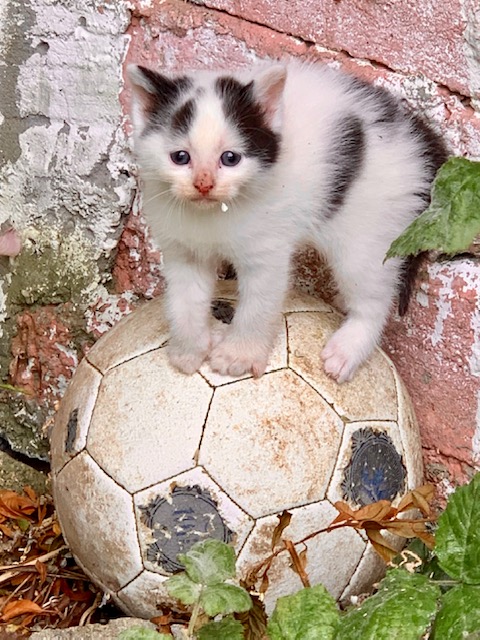 It’s a stormy Friday night and I’m upstairs with marque 5 trying to remember how to do long division. The school hours have slipped on by, what with work and visiting my father and the weekly shop and another thing that has been hammering away at me since yesterday. It’s catch up time.

‘Bring the nine down’, I say to bemused twinkling hazel eyes. He knows not what I speak of and nor do I. I’m simultaneously googling away, but not for long division tips. It’s a rescue I’m after. Seeing as the vet said that it wouldn’t survive on its own. The rescue place I need to try now is coming up as temporarily closed due to Covid. I couldn’t get through to the others either. There’s a number strictly for emergencies for this one. Is this an emergency? Maybe his mother will come back for him. Maybe she just needs a little more time to work it out. Like we all do.

There’s a knock on the door. Marque 4 comes in.

‘Mum, can I have a word with you?’ Gosh. How very formal. Something bad must’ve happened. His eyes look wider than usual. Tinged with alarm.

‘So, Mum, we brought the the kitten in to the house’, he whispers, tempering me.

‘What? No. Jesus. We can’t do that. We can’t bring it in. Dad’s highly allergic and it’s feral, god knows what it has, parasites, we’ll have to take it back out. I’m trying to get a rescue place and…’ 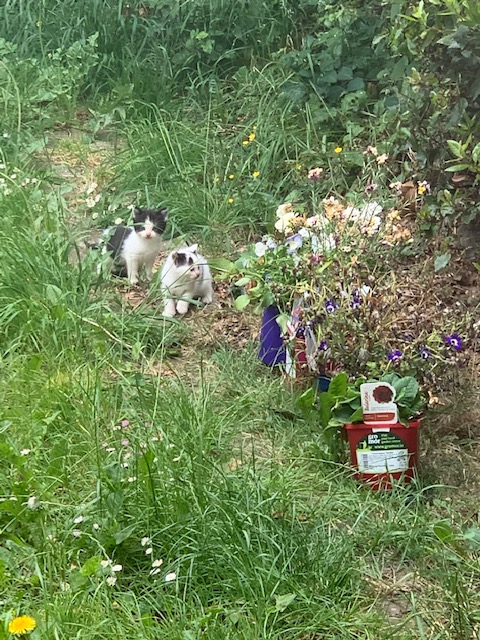 ‘Dad brought it in Mum’.

Well now. The thudding begins. Me descending the stairs a little more heavily than necessary, keeping beat with the thuds in my neck. Not two hours ago he was saying there’s no way we could bring it in. It would land him straight back in the hospital. Which is why I’ve been ringing the vet, the NSPCA, Cat Rescue and next up the emergency number for the DSPCA. Then without a jot of consultation when I’m safely ensconced in battling out long division, he whips the thing in anyway. I burst through the breakfast room door to the sight of a slightly sheepish smiling husband stroking the little thing’s head. It’s in a red and beige Vans shoebox on the table. I try very hard not to look at it. It will be dangerous to look.

‘Jesus, what are you doing? We can’t just bring a feral kitten into the house. It could have any range of parasites, fleas, god knows and we have a dog, remember, and there’s your health which we’ve just got back…’ I’m aware that there are many pairs of eyes on me as I rave on with the impossibility of it all. Wide silent eyes, laced with a little bit of amused terror. Perhaps this is it, I’m thinking. Perhaps I’ve finally cracked and the poor kids have to witness it full on.

‘Well there’s no way we could leave it out in the storm, is there?’ asks the highly allergic parent in a highly annoying rational voice.

‘It’s getting dark and the rain has kicked in’, the rational voice continues. ‘It’s cold, hailstone cold, and a big storm is forecast for overnight. He wouldn’t survive it’.

‘How did you catch him up? Was he scared?’

‘I got him Mum, he kept running away from Dad’, marque 2 chimes in.

‘Not a chance of me catching him’.

‘He was hiding under a load of stuff and pretty scared at first’, marque 2 continues. ‘It was hard to get near him. I put a sock over my hand and arm in case he’d bite or scratch, and when I got close enough I picked him up by the scruff of the neck like the mother does’.

Of course he did. Marque 2 always knows what to do, and does it in a calm assured way. It would be impossible for anything to be scared of marque 2.

I glance at the little thing, shuffling around in the box, the black sports sock in beside him for comfort. He looks up at me. Sad blue eyes. White fur in the main with spots of black. Delicious. But I already know this. I have lots of photos on my phone from the last couple of days. Him with a sibling one day, creeping through our No Mow May (June) garden. Then ones of him all alone. Standing on an old football. The mother moved the sibling on and left him. Abandoned.

‘Let’s have a look then’, I say, sitting down at the box. Something akin to the let down breast feeding reflex kicks in. Just as they all knew it would.

‘Yes and he was starving. We gave him some tuna, he hoovered it up’, one of them says. I can see they’ve put a shell in the box too, filled with water. Ever resourceful in their mother’s absence.

‘She’ll know what to do next’. As I sit there falling in love they ring my mother who has rescued many a kitten. She rescues and keeps them. There was a time when she had six. She is the calm voice of reason. We’re doing it all right. Just wash the hands properly and work the rest out tomorrow. We know we can’t keep it. But maybe we can save it.

The boys get busy setting up a home for him in the porch. We need to contain him and keep him separate from the dog. They make a kitty litter of sorts, sand on a birthday party paper plate. I laugh to myself at the idea of it. A feral kitten using a litter tray. They put down water. Line the Vans box with a towel. Plug a draft in the front door. Then they sit and watch him through the glass. Oohs and awws resound. I try to block them out. I need to get to the solution. What we’re going to do with him tomorrow .

I wake with a thud. It’s 6.30 on Saturday morning. An awful thought. What if the little thing didn’t survive the night. I run downstairs and peep into the porch. No sign. Empty bed. God. Then I hear it. The most gorgeous little mewl. Very close by. I look down. He’s right beneath the glass door behind the little electric heater that marque 2 set up for him. Just asking to be invited further in. The dote. I step into the porch and stand there. He rubs his little head off my ankle. Then he steps on my feet – front paws on one foot, back paws on the other – mewling, as the lactation kicks in once again.

The kids all rise early too, dying to see him. A couple of them are looking for anti-histamines. Something has set their eyes and noses to open tap mode. I daren’t look at their father. The dog has come around to the arrangement. They’re talking to one another, the kitten and him, through the glass door. Swapping their stories. I dose my addled brain with lots of coffee. Someone around here is going to have to take action. I phone our vets again and explain that I want to get him checked over and look for advice about what we can do. I’m told we can bring him up and they’ll check him for ring worm amongst other things. They’re also going to phone a couple of people who said they were looking to adopt a kitten.

He’s asleep on an old black kid’s runner, ah god. I line the Vans box with a cosy brush cotton pillow case. Just before I pluck him up he meanders over to the the kitty litter. Bang in the middle of the sand on the happy birthday plate he does his business. What? How the hell does he know to do that? Our very clever little boy. He’s so easy to handle too. Doesn’t flinch when I pick him up and put him in the box. I close the newly perforated lid and bring him out to the car. He sits on my knee and we drive off with him and I wonder whether I can actually do this. Can I hand him over for a possible adoption when it’s pretty clear he’s ours? On cue, the driver starts to sneeze. His eyes begin to stream. There’s the faint hint of a wheeze. Let’s do this.

The vet nurse emerges from the door and I hand the precious box over. She smiles reassuringly, much like a midwife would, and says she’ll phone me in a few minutes. It’s an anxious wait. I feel I should be a nail biter or a smoker or something devastatingly useful.

The phone blasts and I press to answer with my Covid gloves. I put it on speaker. She announces that it’s a boy, yay, of course it is, and that he doesn’t appear to have ringworm but he does have flea dirt so she’s treating him for that. The people who were looking to adopt a kitten have since got ones. So her mother will take him for the weekend, if that’s okay with us, and she’ll put the feelers out for a home next week.

‘There’ll be no problem getting him a home, he’s lovely. Sad eyes. So cute. He even purred when I was checking his tummy’. That’s my boy.

Back at the house and it seems horribly empty. No more delightful little mewls. No more lactating tugs. I remove his bits from the porch and bin the kitty litter, smiling at his brightness still. Dreading the moment when I have to tell the others he’s gone. I stare at the photos of him for the rest of the weekend, and in my own way pray for him to get a good home.

It’s Monday morning and the phone rings merrily beside me. It’s the vet nurse.

‘We brought him to my brother’s. They have a cat who had kittens a little while ago, but they all died’.

‘We wanted to see how she would react to your kitten. And she’s taken to him. She’s cleaning him and taking care of him as if he’s hers’.

A violent stinging in my eyes. A tremble to my voice.

‘Yes, it’s so cute, the two of them together. He’s very playful. I’ll send you a few videos and pictures if you like’.

‘Absolutely. The kids will be thrilled to see them too’.

A grieving mother cat adopts a kitten abandoned by its own mother. All in a roll of the dice. 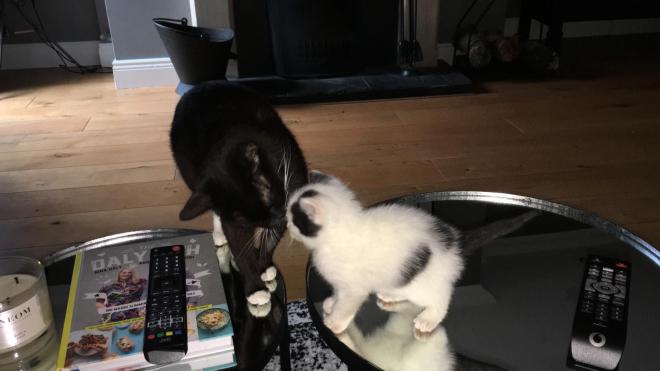