We have feral cat visitors in our garden. We welcome them. We leave out water and sometimes food. Then we watch through the French windows as they take their tentative steps towards the old lunch box and munch furtively. The kids delight in it. They make hissy swishy cat encouraging noises. The parents delight in the natural outdoor rodent exterminators. The cats delight in our haphazard garden. They play in the broken tents. They scramble up the trellis and sit on the high wall surveying. They sunbathe on the flat black roof of the kitchen extension. There’s a synchronicity to it all – the cats in their multiplicity with their unstructured free range exploratory play mirroring the values of our family.We hire a skip to de-junk the garden. Rusty old bicycles, broken plastic cars, burst bouncy toys, un-pitchable tents. An unhinge-able broken old wooden door lies at an angle in the hedge-row. The skip beckons. I lift it and yelp. A pair of stern yet terrified yellow eyes stare at me. She does not move. Nestled in beside her is the tiniest kitten. Eyes closed, days old. The mother looks like a defiant teenager, daring me to continue with my eviction. I place the door carefully back down on them.

There are squeals of delight when I share my news with the brood.‘You mean they actually live in our garden?’‘Was the baby born under the door?’‘Can we keep them, please?’‘We have pets, hurray! We’ve always wanted pets and the y’ve come to us!’The skip leaves minus the old door. We call their nest Coombe corner, after the hospital where most of ours were born. The kids scatter dry cat food all over the tidy garden. The parents agree that it would be wise to google it. Taming ferals, diseases, injections, pit falls.

It’s a beautiful sunny spring day when I decide to mow the lawn. I sneak a peek into Coombe corner and there are no eyes staring out at me. I mow merrily for the first time since late last autumn. I stop to empty the grass and admire the transformed space. There’s a loud scurrying noise in the foliage above the blue door. Mother cat is scarpering frantically up the trellis. She has something in her mouth. 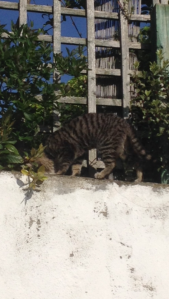 It takes me a moment to work out that it is not a mouse, rat or bird. It’s her baby. Eyes still closed. She squeezes through the fence into next door as I call ‘no, don’t go, please, too loud I know, I won’t switch it on again, hissy swishy,  here kitty kitty, I’m sorry, come back, baby come back’.

We sit in our tidy mown garden and wait for our untamed pets to return. I peep into Coombe corner, obsessively, compulsively, checking and deflate a little each time at the sight of the empty nest. I think of the synchronicity again – this is a window to the future, and I resolve to enjoy every bit of young family life before I’m peeping into their empty rooms.

‘I wish I had ear plugs’ I hear myself say before I can stop.
‘I wish I had ear plugs that I could shove in my ears for the first two minutes when you all get into the car after school’, and I don’t look around to absorb the potentially hurt faces. I do not need to have those in my memory bank for guilt tripping myself in my dotage. Today is an acute case. It goes from passing the hour wait with marque 5 in pleasant (grab hold of these remnants of babyhood) banter and laughter to the assault.
‘Mu-um what about our book lists?  I told you they were due in and today is the LAST day’.
I’ve been putting it off, naturally. All that adding up and forking out in one go. Four booklists. Procrastination is called for.
‘I thought they were due on Wednesday’.
‘Well everyone else has theirs in by now’.
‘Yes but what day are they actually due in?’
‘I don’t know’ marque 3, the accuser says.
‘Wednesday’ marque 2 says assuredly. Saving me again. But then  – ‘Mum I definitely need my eyes tested’ and he goes into an elaborate tale of fuzzy letters on the board, of having to copy from his neighbour and then his own resourceful testing of the situation.
‘So I got my best friend to come down to the back where I’m sitting at break time. I asked if he could read the words. He said yeah, sure, no problem. So I NEED to get tested’.
‘Tested. Right. Of course. Although I think we’d know if there was a problem. You don’t seem to miss a trick to me. And anyway didn’t you get an eye test in Junior infants?’
‘I was four then. I’m nearly eleven. Maybe it’s time for another one’.
Point taken.
‘Mu-uu-uu-mm’ comes a wail from marque 4.
‘I’m in a show TOMORROW and I need all the costume stuff…’
‘You didn’t tell me you were in a show tomorrow’.
‘I DID. I gave you a note last week and you lost it and now I don’t know what time it’s at or what I have to wear’, and he sobs, real tears. This is all before they have their seat-belts on. All before we make our get away from the school gate. This is when my ear plugs comment enters the space. Just to add a bit of fuel to the fire. I could do with a good wail myself.

I nab marque 4’s bag and rummage. There is no way he gave me any note about a show. That I would remember. Especially as I’m supposed to make myself available. The show needs an audience. He’s as disorganised as I am. He forgot all about it. I rummage until I seize upon the crumpled note with the vital information. So annoyed am I at being accused twice – nay thrice in two short minutes – that I read the note aloud in what only could be described as a ‘see told ya so’ style. The others row in behind me now.
‘How can you expect Mum to know about your costume and the show if you don’t give her the note?’. This is going even further downhill. I am vindicated but there’s a mob vibe mooching around and I’m at the helm. Time to act like a parent again. On it goes.
‘Maybe she won’t even be able to go now all because you didn’t give her the note…’ Ascending wails.
‘Alright, enough. I will be able to go. We will be able to get the costume bits, although it will mean having to get out to the shops tonight. Marque 4, you need to be more organised. You need to hand the important notes over as soon as you get them so that I can act on them. There are repercussions…’ (I use this word a lot these days) ‘from being disorganised’.

They are silent (phew) and they never, ever ask what repercussions means. One of those mother words best left misunderstood. Maybe she’s really talking to herself after all. Now, homeward bound to fill that skip we had delivered this morning.

Waiting in the rain in the car at the school, marque 5 breaks into verse: 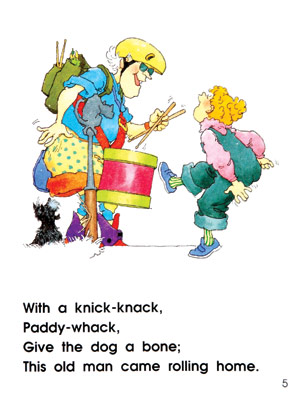 Pitch perfect, fresh faced straight from his junior infant class, this four year old chimes his insidious rhyme. There is no-one to impress with his impish take on it. We’re waiting for the brothers to emerge from their classroom labours. They would kill themselves laughing and then tell him not to sing it in school. Much as I’d like to now. There’s a niggle though. Something to do with the way he seems to be singing it just to himself, no audience or giggles necessary.

I try not to say a thing. Drawing attention to it might reinforce it and he’ll be singing it merrily all day long. But then I wonder. Where did he learn the original rhyme? We’ve been pretty remiss on the whole singing nursery rhymes with the kids thing. Despite how good it’s supposed to be for them. Despite the fact that it was a strong recommendation for marque 4’s speech development. We packed in a few the week of that suggestion and forgot about it ever since. It seems quaint and old fashioned and out of sync. It seems to be more about parents reminiscing than anything much else. Or maybe we’re just lazy.

Anyhow the chimes of the four year old have my mind a-whirr, as it were. That dirty old man, playing tricks and knick knacks on dicks and rolling home drunk as a skunk afterwards. The bastard.

‘Who taught you that song?’ and I’ve my fingers crossed that he doesn’t start to talk about some dubious geezer who has somehow slipped beneath our radar.
‘What song?’
‘The one you were just singing.’
‘That’s not a song’.
Patience is called for.
‘What is it then?’
‘That’s just something I taught myself’ he says and begins the verse all over again. The verse with the six.

My antennae sharpened now, I can imagine subtext everywhere. This afternoon marque 4 is reading to me with delightful fluidity. His book for today is Dr Seuss’s Green Eggs and Ham. I am smiling at him and winking my encouragement as he does not stumble over the rhyming rhythmic words. Maybe the speech therapist had a point. Then I actively listen.

Would you, could you,
In the rain?…
Could you, would you,
With a goat?

Bloody hell. ‘That’s enough now for today. Excellent reading. Well done. Your teacher will be so pleased with you’.
‘But I want to read on, just a few more pages, please’.

The blurb on the back of the book states that Dr Seuss makes reading FUN! It’s all about the rhythm and the rhyme and the repetition.