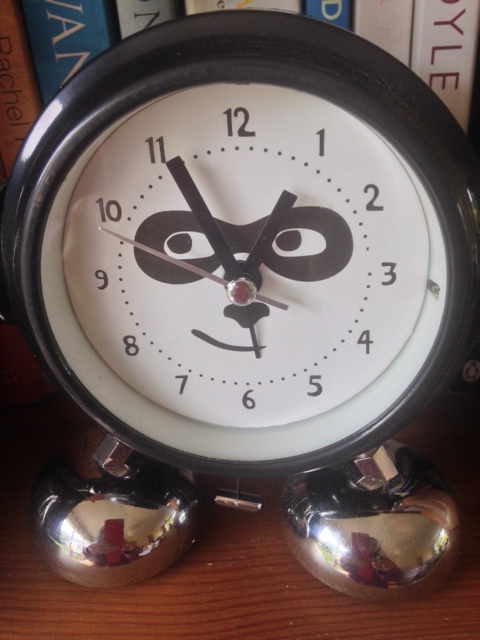 ‘I’ve only ever seen you in a denim jacket’ he says. I stand before him, this, my second child, wondering what he thinks. He has an aesthetic eye and whether coral pink is a runner with a jet black jacket is a quandary that he might be able to solve. But he seems to have no interest in solving it. What the hell is his mother doing dressing as if there is  a boardroom somewhere out there shouting at her to hurry on up and join in?

Phew. One less thing to worry about. It’s time, you see.

The weather whips in helping to contextualise day to day stresses and concerns. We get into survival mode as our world turns white backed by a red alert. When I say we I mean the kids. Somehow, somewhere along the way, they’ve emerged with insights into how to best handle a tricky bout of weather. Starting with their shoes. Us parents look at one another wondering if we ever did manage to buy wellingtons while the kids find their father’s old doc marten boots, lace them up their skinny teenage legs and attach snow grips to them. Then they offer to trudge to the supermarket for the essentials that someone around here should’ve bought yesterday – only she was busy being interviewed a day early on account of the country closing down. We don’t even need suitable footwear what with all these adept kids with their young supple joints. We can send them out to forage without fear of a slip and a dislocated hip – and climb back under the duvet for the duration. Which is what we do. Marque 1 checks the car and reports that it does indeed have a bit of life in it. Not that we’d be going anywhere. Marque 4 powers up torches and dots tea lights all around.

‘I hope we have a power cut’ he declares. Which flips the adrenal glands into fight mode.

‘Oh god, don’t wish that upon us, we’d have no heat, no way to cook or anything…’

‘We would, we’d have the fire and we could all bring our covers down to the sitting room and…’

‘Great. What about cooking?’

That should put a stop to this. He’s ravenous most of the time.

‘Yes, I thought of that’ he says, waving a disposable barbecue under my nose.

‘We can set this up on the hearth and cook whatever we like. Even boil some water for a nice cup of tea’.

Where did these kids come from?

They summon their father out into the white. We ponder the shoe theme once again.

‘Hang on a second, don’t you have your Dad’s hiking boots?’ I say, climbing on a chair to root in our top cupboard and there they are, as if by magic, perfect for the snow. He’d like that, we both think. We both know. Then the symmetry of it. All the sons in their father’s boots, to brace whatever will come their way.

Day three of the kids showing us how to survive and I’ve got in on their vibe. I’ve scrounged around and gathered an array of vegetables that would otherwise be off to the compost. Eyes have been chopped off potatoes – organic ones sprout them super quick , I swear – and limp celery is in with a chance to pump a few vital vitamins into us. I’m chopping away, onions stinging my eyes and I stop for a moment to check my e-mail. A call to a second interview. Traction in the snow. I will not say that a primary thought flashing by was the possibility of wearing the coral pink top and black jacket for a second time. No. A frisson of delight. A validation. This could actually be happening and like I said, it’s time.

We skim through the second snow in and this time I drive marque 1 in peak bleak blizzard all the way to his weekend work. We slide and skid and he worries about me getting back safely and I worry about him freezing in his semi-outdoor workplace, but overall I bubble with pride. He’s working. Keen to get there despite the conditions. My boy. I hope to be like him.

The traction builds. The long awaited awards night is upon us and it is such an honour to be nominated. I block out the fact that I haven’t heard back about the second interview. This is an occasion to be savoured. A rarity. A peak. I cook a chili con carne for my mother to dish out to the kids. I’m boiling the rice when I check my mail. It’s good. Very good. A job offer. I’m stunned. But I have to run upstairs and transform into a smart casual person, double-quick, so that I can leave for town. In my delight and surprise  – a job offer and an awards ceremony on the spring equinox – I manage to forget about the rice. It burns dry. A taste of things to come. But it’s time.