Marque 4 whips a book from the shelves to lean on for doing his homework in the sunshine out in the garden. I smile when I see it. Parenting is Child’s Play. Not that I got around to reading it. Not enough time. It’s not working out. This whole leaning on the book on his knee thing. His writing isn’t too hot at the best of times. He’ll get into trouble if he hands this lot in. I provide him with a chair to lean on instead.
‘Maybe we should toss this book over the wall into the neighbour’s garden’ he suggests. It has been as useless for him as it was for me. And they have young kids too. Perhaps they’d have better luck with it. Thoughtful.
‘Well I haven’t had a chance to read it yet, so better not. Do you want to know what it’s called?’
‘Yes’.
‘Parenting is Child’s Play’ and he laughs.
‘That’s so funny. It IS child’s play. Let’s tell the others. Hey guys, parenting is child’s play’ and he cackles on. Better not tell him about the Raising Happy Children for DUMMIES that’s knocking around collecting dust here somewhere too.

We are thankfully out of the stage of looking to the shelves of book-shops for answers to our parenting quandaries. In fairness, he was never in that stage. Use your instincts and best efforts and it’ll be grand is how he sees it. Mother guilt and niggles of doubt not featuring at all in that mind-set. I’d try to imitate him at times, mooching around in a guilt-free zone, trying to care not a jot about the small things. Best efforts and all that. And then I’d hot tail it off to buy a book. He used to laugh, along with my own mother, when I’d purchase a book and spout the latest while breast feeding in a corner.
‘What are you buying those books for?’ my mother repeatedly asked, chortling away. She had Dr Spock or nothing. I think she chose nothing.
‘You should be writing them not buying them’ she’d say, which was vaguely reassuring, even if I’d no intention of ever doing so. You don’t feel quite so gung-ho when you’ve five kids aged 8 and under. Or was it when we had the four kids aged 5 and under. I forget.

Most of the books I’d lurch for in crisis had ‘positive’ or ‘confident’ or ‘happy’ somewhere in the title. Sometimes just purchasing a book had the desired effect. The crisis having slipped on by without the need to turn a page. The book relegated to the bottom of my monstrous bag of reading material to be delved into in snatched moments of quiet time. Given that there’s really no such thing, the bag just got heavier with desired tomes – parenting, philosophy, short stories, creative writing, novels. If a moment did present itself, I’d often spend it wondering which area I should plumb for. Then it would be gone before I’d made up my mind. 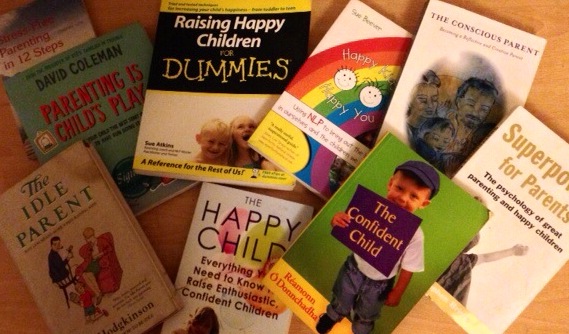 I have a keen memory of the ridiculousness of the parenting purchases from one episode. I was in a chair in the corner breast-feeding, two toddler-ish kids playing in the garden and the eldest knocking around (aged 5 ish). Time for a read. What pleasurable experience did I select from my book bag – a happy confident children tome.
‘Mu-um can we da-di-da-di-da…??’ I was so immersed in the book that I was ignoring the child whose happiness and confidence I was concerned about. He was speaking to me. Repeatedly. Some question or other. If I kept reading maybe the questioning would die down a little, go away, and I could continue to absorb these clearly needed parenting tips. And then it struck me. What I was doing. Sidelining the actual child while busy learning how to increase his self-esteem.
I looked up from the book with a smile so wide that it frightened him a little. I think he even took a step back. I snapped the book closed. You have my full attention.
‘Yes, sweetheart?’
‘Can we make some lemonade mummy?’
Building up self-esteem, I had been informed, included looking like you want to spend time with your children and pretending to enjoy making a mess even when you have a hundred other things to be doing. With the baby (2 months) or the toddlers (1 and 3), with the house, or the washing, or the dinner.
‘Yes we can’ I said dumping the book, winding the baby over my shoulder, and heading for the kitchen.
‘We can? Now mummy? Really?’ and his thrilled excitement coupled with a smidgeon of suspicion made me laugh. A little hysterically perhaps. Thinking of all the times I must’ve said ‘No, not now, I’m feeding here and then I have to do this and then I have to do that. Some other time sweetheart’, to a crest fallen face. So we cracked on with the lemonade, me beaming away, scaring him with positivity, and I carry that image with me. Mother absorbed in book telling her how to be with child while blanking the child with all her might. Instincts and best efforts. There’s a lot to be said for it.

We’ve reached a new realm, whether we like it or not. I’ve known this only since last week for certain. Killing the hour between pick ups sees the two of us – marque 5 and myself – meandering around with an occasional trip to a cafe. This is rare individual time which I savour as it will all too soon be gone. One day we were chatting away, diving into hot chocolate and cappuccino, in our own world, dimly aware of the table beside us.

Until marque 5 and the other little boy said hello to one another. The woman with the other boy was there but elsewhere, checking her phone, and so quiet with the boy that I thought she must be a child-minder with very little English. I was wrong. As the two little ones hit it off we sort of had to chat too and she was the mother, who doesn’t usually do the pick up. She said she was ‘trying to give him some one to one time’. It was when she started to quiz me that I knew. She was looking for answers. I looked like someone who might have a few. I was one of those. I never would’ve thought it.
‘But you look so, so, god, calm? How does that work? I thought I was bad with two, five, god – how? What do you do with them, say at the weekend? I suppose, being boys, you just have them doing a load of sport…’ She looked tired and as if she was on the verge of purchasing one of those books for the answers. ‘How?’ It’s tricky now that I seem to have morphed into one of those. The mothers I used to see as well, looking as if they had it all sussed, and I’d wonder. How do they look so focused on the one child, as if they’re actually enjoying themselves, when they have all the others to fret about. How? How are they not just one big ball of stress? How the hell? Now I know the secret. It’s as simple as having older children too and knowing, really knowing, how fast it actually goes. So enjoying it comes easily. But you can’t say that, not to someone who can’t see it yet. They’d secretly wish to throttle you. The trickiness is in treading carefully, engaging while not providing intangible answers, looking like you have no answers yourself. Which you don’t, not really. We’re all just muddling through to the next realm after all. So I didn’t tell her that they’re not sport crazy, even though they are boys, so we don’t have them doing that all weekend. That we let them find out what they’re into and follow their lead. Which has worked well until recently, with art, swimming, guitar, animation, Coderdojo and a smattering of basketball along with out on the road play. It’s come back to bite us now though. This following their lead idea. Marque 1 (13) is showing a frightening interest in motor sport which we have no clue about – except that it’s expensive, potentially dangerous, and there’s travel involved. Maybe we should’ve pushed the traditional sport thing after all. Fools… Perhaps it’s time to run out and buy the sequel: Parenting is Child’s Play -The Teenage Years. And some far off day, fingers well crossed, we’ll be laughing and thinking about throwing that one over the garden wall too.