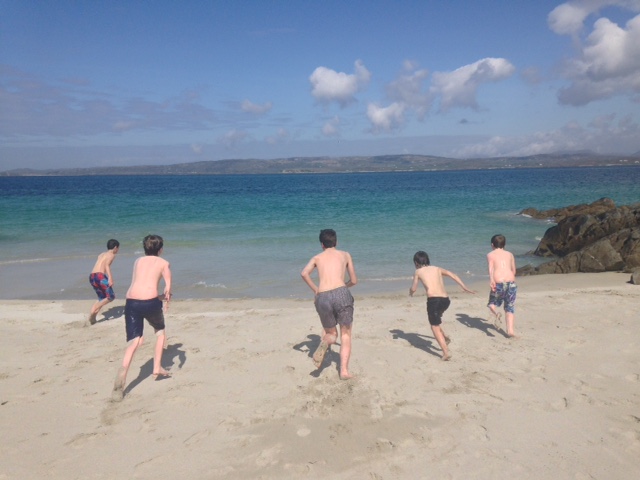 It’s just as well that the Easter Holidays were peppered with lots of little delights that we can now cling to. I flood my mind with the images. Hidden golden sanded empty beaches. My crew stripping off and flinging themselves in to icy water, daring one another to duck their heads under and bring on a terrible aching brain freeze. Unselfconsciously entering the water at times in their boxers when the foolish parents thought the weather was for walking rather than swimming and left the togs bag behind. Surprised by the sudden burst of sunshine. Every little ray counts. It’s just as well. Because now that we are back, ensconced in the wicked routines again, an unsettling sort of pressure is building. I’m greeted at the school gate by a blast of needs. All the things that require urgent attention.

‘You know the way we took the day off school for marque 3’s Confirmation?’ Marque 4 asks with a hint of indignation.

Ah yes, that seems like an age ago now, but in truth it was early April, just before the break. A lovely special day.

‘Yeah well, that’s when our booklists were given out and we missed them so now they need to be in by Friday with all the money paid, or else no books’.

A quick tot. A few hundred euros by the end of the week. Great. I pull an image from my holiday archive. It’s the dead dolphin at Dog’s Bay. It works.

‘I need braces’, another announces. In fairness he waits until we are in the car getting our belts on to deliver this one.

‘No you don’t, you have lovely teeth’. He looks at me with an ‘it’s all relative, Mum’ sort of smile. Terrified really that I’ll tell him again how I wouldn’t get braces for myself, how I didn’t want to put my parents to that dreadful expense. Sure what harm did an acute angled front tooth ever do to anyone?

‘Everyone was talking about their teeth today, their lovely straight teeth, that they are so proud of and a few of them told me I need braces’.

‘Yeah and I was laughing at the time’. This is a softener. In case I begin to probe. To find out if he was upset. Who? What boys? The cheek of them.

I conjure another image. This very child running around the bay plucking multi-coloured foil eggs from their hiding places.

‘I need to decide my Leaving Cert choices by tomorrow Mum’. Now that does sound serious.

‘And the thing is that I really like geography and history and art and music and I wouldn’t mind doing physics or biology and economics could be a good one but I can only choose three’.

‘Your father. Speak to him’. Ah it’s great to have a decisive person in the house. There needs to be at least one of those. I picture this child relaxing in the steam room and sauna at the pool. Bubbling away in the jacuzzi. Enjoying a non-alcoholic beer with us. His Leaving Cert calling him now.

‘The French teacher asked if there was anyone, anyone at all who is still 13 in the class and I had to put up my hand, at the end of second year, when plenty of people are 15 already. J’ai tres ans. That’s what I have to say’. Well now there’s not a lot I can do about that one until the end of the month, sweetheart. A little fizzle of guilt though. Being the youngest in the class has always been a bit burdensome for him, even if he did have the maturity of a young adult at age five.

Now that is a challenge. It’s 8.30 and I’m leaving the house with the 3 primary schoolers as well as the dog, late as ever, when this secondary school demand is drummed at me.

‘They’re both black’ I say reassuringly, ‘even if that one has a splash of yellow at the top. Sure just roll it down a bit. No-one will notice’.

‘We had another teacher today and she was talking about all the lovey benefits of travel and asking where everyone has been. Five people have even been to Tokyo. (Point of information: they are 12; they have not been to Tokyo). And one has been to Russia (POI: he’s Russian). And they’ve all been somewhere and then she asked me where I’d been and when I said I hadn’t her face, well it’s hard to describe really, she didn’t know what to say, her colour, she went a sort of, well I don’t know what it was really, she was just so shocked’.

Great. It’s probably best not to respond, I think. To let it wash over me instead. To not say all the things that are rattling in me as I picture him squirming there puce in the classroom. To hell with it. ‘I didn’t go abroad until I was 15, and it doesn’t seem to have done me any harm, in fact…’ and I lecture on, more to myself than to him, about mortgages and multiple children and fees and gratefulness and values and how we’re all doing our best and counting how lucky we are is, in fact, the best way to look at things and how someday, yes someday, we might all be able to have an adventure off this island, we’re working on it as it happens, but in the meantime… In the meantime just finish your homework and go to bed.

The images seem to be leaving me. It’s just as well I have the pictures to prove to myself that we were a semi-blissful non-comparative family unit a few short days ago. I have a peep at my archive. Yep. There they all are, laughing and swimming and enjoying barbecues with the dog. Although there was a hint of it on one of the days.

‘Can you get a picture of me sitting high up on this rock. Everyone’s posting pictures of themselves on Instagram in Madrid and Barcelona. (At Easter? Really?). Sitting on a rock in Connemara will have to be it for me’. That it will. At which he leaps off and swims like a very lively dolphin.

This particular child did tell me to play the lotto though (is it a concern when your children tell you to gamble?) on the day we were coming home. He’d had a dream, and I always tend to trust his dreams. I screeched into the shops at the last second and got a ticket and then left it in the car for a week. I checked it yesterday. He was right. 42 glorious euros right. I beamed as if I was holding the jackpot ticket and then purchased a lovely hardback notebook for my scribbles. I can be found for the foreseeable hovering over his bed ready to catch his dreams. He needs braces too apparently, and there’s no such thing as a free brace, it seems, after all.