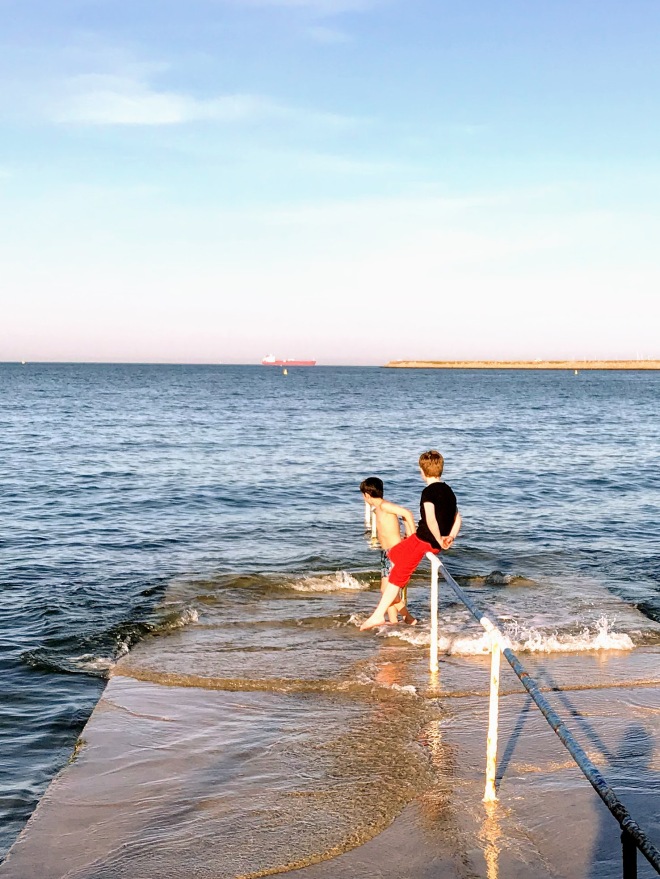 ‘With all change comes growth’. I mutter this, on repeat, for the benefit of my children – or myself – as their father sets sail across the sea to his new job.
It’s a mantra I learnt when working on a team alongside lovely family therapist. Only then I was in my 20s and the idea of lots of change and growth had a certain appeal.

This wasn’t the first mantra that came to mind as the story of the semi-emigration began to unfold. Little less philosophically rich things raced to the fore. ‘If it ain’t broke, don’t fix it’ style things. I tried them out on some pals. Both versions. It’ll be good. It’ll be not so good. It’ll mean we can do this. It’ll mean we can’t do that. It’s a new horizon. Who needs a new horizon? I’m a master at the art of balancing out my own arguments and reaching a lovely stalemate. They nudged, these pals, gently, listening and reframing, providing little gems that I could draw on later. I’d been given the casting vote, you see. If it was going to be unmanageable this end, me flying solo with a job and the five kids, then we’d do something else. If I could hack it then we’d do it. But how do you know if you can hack it? How can we tell the toll that this might take on me, on him, on us, on the family?

As with other key decisions I’ve made, or been part of making, in the end a strong leap of faith kicks in and I feel it just like that – as if I’m hurtling towards an inevitable cliff edge and taking a leap, expecting to soar, not to fall. It works out well in the main. This leap is a little bit more risky than most though. It’s a timing thing. The new opportunity coincides beautifully with Brexit. #Brentrance. He might be after a Blue Passport courtesy of being married to me. Sweet.

We do a TKMaxx new suit run for the traveller. He buys shiny new boots. I suggest a lovely Sunday walk. Our Sundays will never be the same again I think and try not to say out loud. Knocking around taking it easy, strolling by the sea with outdoor market food, until the dreaded hunt for the school stuff begins at night. No. From now on we’ll also be preparing for him to leave. Packing. Checking. Rechecking. Repacking. I let it slip. The tip of my thoughts.
‘It’s not as if I’m off to an oil-rig for six months’ he says which works not a jot.
‘We’ll be on borrowed time. From now on. You’ll sail home for the weekend only and in our heads, always, it’ll be there looming…The pace of everything will be altered, cramming in our fun, never meeting for lunch during the week…’ We’d had it pretty good of late. Work flexibility, a marvellous thing. I’d get the kids ready for school and he’d drop them in. I’d get to work on time. He’d pick me up at lunch time and we’d get something to eat out. Especially when we knew the change was coming. Every day we’d have a date lunch. Utterly unsustainable, but hey. The lovely lady in a little Japanese place got to know us so well that when we failed to go there one week she was concerned about us. Asked us what had happened the next time we saw her. Worried eyes breaking into a twinkle when she was reassured that all was well. No more holding hands over the Bento box when the semi-emigration kicks in, I mumble. Even though the decision has been made, the leap taken, the little niggles burst through, uselessly. I must remember my mantra. There’s an upside for the waistline in all of this after all.

I declare to my work colleagues that my start time will be half an hour later from now on and I’ll work it off the other end. And that my availability for attending mid-week conferences and events will be limited. And if a kid is sick… And if someone has an appointment… And if… The ‘with all change comes growth’ doesn’t seem to apply here. I’ll need to stymie myself for a while. Just as I was getting my wings back I think and try hard not to say but it squeezes on through anyway. Just a little rumble.

It’s the kids who encourage us on. They see no barriers. They have full faith that I’ll manage everything fine here and it’ll be an adventure to have their father flying away every week and back for the weekend. Some of them plan to visit him, an adventure for them. He runs with their enthusiasm, wonders if I’ll be able to visit him too (eh how now?).

The alarm is set for the middle of the night and we both get up, checking, repacking, rechecking. He dresses in a new suit. New shirt. New shoes. Old tie. A good luck thing. We drive to the airport bus. The only other creatures out are the foxes. A soft drizzle descends as he alights the bus and I turn the keys in the ignition, humming my mantra all the way home.