I attempt in vain to coax marque 2 out of the bed. He’s muttering something to me, some mumbo, half asleep, jumbo. I reiterate. He mumbles. I stare at the duvet and wonder if reefing it off the bed would be considered as a sort of trauma later on. Something to be re-told to friends, partners, therapists.
I desist. Despite the fact that standing here talking to him gently about how late we already are is making not a jot of difference. A little threat perhaps.
‘If you’re not up and out of the bed in the next minute there’ll be no Friday treat’. Big guns.
‘Can I just finish my dream first’ he says, which I realise now is what he’s been mumbling all along while I’ve been considering my tactics.
‘Of course you can’ I say. Ah god. What a lovely idea. If we could all just finish our dreams first…

There is an ongoing tug-of-war in my own mind about the benefits of the school morning routine. I find myself staring at them in their cozy slumber, knowing I should be proactively waking them, and I turn on my heels to leave them for another few minutes. I busy myself downstairs with making sure everything is ready for when I have the courage to wake them. Then I try again. I hover, listening to the gentle snores, and I try to whisper them awake. I visit all the bedrooms with my whispering as a round one tactic. When no-one stirs I revisit with round two, talking now, repetitively, cajoling. Eye-lids flutter. It’s a dizzying affair with five of them. All the while as I hover not really wanting to wake them, I know that there are consequences. Every hovering moment extenuates the pressure on the dressing, breakfasting, and grooming to come. Round three tactic (how late we are getting plus a little threat, some deprivation) is where I am with marque 2 when he requests to finish his dream, which catapults me back to a pre-round one state of not wanting to wake them at all. Perhaps I could just collapse here in a heap beside him as he sees this dream out. Maybe, just maybe, we could all sneak a little day off from the dastardly routines. Knock around, free range, learning in different ways from fun and play rather than the prescribed syllabus.

I think of the first Monday morning after the Easter holidays. I have successfully herded them all downstairs. Marque 2 is putting his tie around his neck when he looks up at me and says ‘wait a minute, when’s my project due in?’ I discover that there was meant to be toil over the break. Toil that he thankfully forgot all about. While I wouldn’t have been able to forget if it was me I’m delighted that he can. A break should be a break, especially when you’re ten. It’s that tug-of-war again. I should be imposing the prescribed rules and the structures on him and I’m delighted when he frees himself from them. Maybe we should be more regimented with them, but how can they emerge as their true selves if we are. If only we could do a boot-camp control group! We’re not keen on the idea of raising robotic creatures, scared to be themselves.

The project was marked down in the end for being LATE – underlined red pen – despite my note about our broken printer which didn’t seem to wash even though it happened, coincidentally, to be true. Despite the fact that he did it all by himself – we’re averse to embroiling ourselves in projects to win best prize. Three days late which was pretty good going considering the others had two full weeks to work on it! Oh well, I say to myself while spouting the school line to him of how there has to be a consequence for not going by the rules.

The lesson fails to sink in.

Yesterday he was supposed to be neck deep in maths sheets distributed as compulsory revision aids for today’s scary fifth class summer test. The one for the report that his secondary school will request to see. I watch as he sets up his paints and canvas in the garden and gets to work. A sunny afternoon spent with his imagination and his brush. I fail to interrupt him, to say you can do that later, now get on with the maths. The truth is I feel too that it’s the maths that should wait. 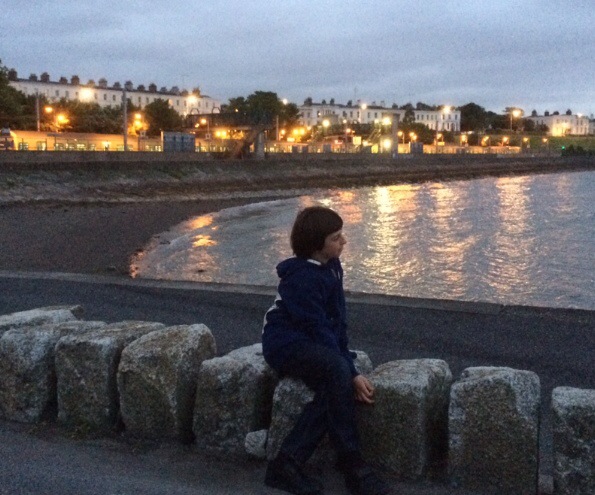 He knows me well.
‘Have you finished your dream?’ I whisper, gently again.
‘Yes’ he says and he’s smiling now. ‘Can we please just be home-schooled?’ he asks and we both laugh.

There are limits to my free range ideas after all.