We decide it is time for an adventure. The memories that we are creating with them and for them have been geographically located in the east and the west. Of this island, that is. We have not burst beyond the peripheries to far flung Europe. Passports and airports and waiting and sweating and sunburn are not things we do. We tell ourselves that we’re keeping them safe. Not dragging them around to encounter the dangers. And sure where else in the world would they want to be, we say, when the sun makes an appearance in Connemara. It was good enough for us as kids so it’s good enough for them, we reason.

Except there are mutinous whisperings amongst the crew. Marque 4 came home from a friend’s house grumbling.
‘We always do the same things over and over. Can’t we be more adventurous, live somewhere different with a bit of a view or something exciting like that?’ The cheek of him. Turns out the house he was in has views over the city. From upstairs windows the airport was pointed out to him. He could see the sea and asked if he could see England. He was, I’ve been told, in awe. Ah god. He has never even been to the airport. I log this with a modicum of guilt. Some day, my son. Some day. We’ve become selectively deaf over the years when the older ones enquire if they will ever, ever, like all the rest of the kids they know, venture to pastures beyond the island. Some day my sons. Some day.

We ease ourselves into this new adventurous mode. We decide to ditch the car in favour of the train to break through the border into the Northern Territory. This is a trip we’ve been promising marque 1 for years now. As an avid Titanic fan – who was interviewed on radio about his interest for the April 2012 commemoration – it is with another smidgeon of parental guilt that we’re only getting around to it now.

When we tell them that we won’t tell them where we are heading but that there is a train involved the guessing begins. We’re off to Bray for the carnival. We’re off to Howth for a picnic. Both ends of the dart line is all they can imagine we’ll stretch ourselves to. This little game makes the elders feel good. Ups the impact of the punch of excitement to come.

We nearly fall at the first hurdle. We’ve pre-booked our tickets to include dart tickets to and from town. We’re keen to avoid any diversions courtesy of the bank holiday marathon. We are smugly organised, foreseeing pitfalls, great parents that we are. We are catching the 9.35 train from Connolly to Belfast. We rock into our local dart station at 8.00. Red neon lights flash 9.20 at us.
‘What does that mean? Maybe it’s the next train is in nine minutes twenty seconds’ I say hopefully as I watch the neon sign unchanging, no diminishing seconds, and allow it to dawn on me that the first train today is actually at this tardy time.
The troop is deflated.
‘But I really wanted to go somewhere’ they are muttering and echoing around us.
‘Back in the car, we’ll drive’.
‘But I really wanted to get the train’.
‘We’ll drive to the train’.
‘Ohhhhh…’

As we stand at the rope barrier, first in line in our zealousness to embark on the Dublin to Belfast train, marque 5 bursts into song.

Crystal clear, he tinkles on, substituting his own words here and there. We shuffle our feet and laugh raucously to drown him out. Of course he was going to sing this. He has been singing it ever since he learnt it for St Patrick’s day with his classmates. We do not cast our gaze around to pick up on any potential nervousness of the other passengers travelling with this nationalist gang.

They bask in the luxury of the standard class carriage, the plush seats with armrests, the window with a blind to be pulled if needed. Little squeals of delight escape when the train pulls out of the station, the smoothness and quietness of it taking us all by surprise.
‘Hey guys, this will be your first time to go abroad’ marque 1 booms, lording it over them as he accompanied me to England once. At seven months of age.
‘It’s not exactly abroad now is it’ I say fearing the intricacies of the debate to follow. ‘It is. It has a different currency and everything. Hey guys, we’re going to another country’.
Sine Fianna Fáil…

The food trolley lady is doing her rounds.
‘Can I use euros in Belfast?’ marque 1 enquires.
‘You can use the notes but not the shrapnel’ is the sage response, no kidding.
‘Is that a northern term for coins then?’ the father enquires, laughing. Always mention the taboo is his mode. Breaks the tension with potential for bonding laughter. She is not laughing with him. She pushes on leaving us with our ignorant southern questions. Shrapnel. Seriously though. I think I’m beginning to feel a little nervous. What if she’s trying to tell us something. Keep on your toes with your wits about you, drop the anthem, drop the inappropriate jokes. I put my head back and say a little prayer of sorts. That all seven of us return in one piece after this long awaited adventure.

The ATM in the station spits my card back at me. It is not recognised. Great. We have to make it to a bank or hope that everywhere takes euros. Lovely taxi drivers offer their services but we decide to traipse. We’ll get a great sense of the place walking. We google and find a branch of my own bank exists in the centre. We will go there and we will traipse on then to the Titanic quarter. Except by the time we have found the bank and done the exchange with all in toe we are starving. A quick lunch and then we’ll set off. There’s a great choice of places to eat with the parents hinting heavily about Wagamamas while the kids debate the relative merits of Nandos versus Pizza Hut. Nandos wins and we have an excellent feed.

The clock is ticking. Even so, we find ourselves walking again. Navigating our way to the Titanic quarter with our noses. This is the flaw of the day. We haven’t a clue really, and marque 5 is intent on dropping my hand and bursting into happy little runs, hurtling towards roads with me running and shouting and grabbing him. It’s much further than the map suggests and walking with five kids is pure folly. At a junction of the M3, which our noses tell us we should take, there’s a ‘no pedestrians’ sign. I’m wondering who’s to blame and as I’m about to decide, miraculously, a seven seater taxi appears. We are saved and delivered to our destination. We were, he tells us, very close. We are, we tell him, knackered and foolish, and we try to make him promise that he’ll reappear for our outbound journey.

The Titanic experience beats all expectations that we could’ve had. It is exceptionally busy with visitors from the south today. The staff are exceptionally patient and good humoured throughout. We wait in a long queue to be taken in a lift to the top of the Arrol Gantry to immerse ourselves in the construction of the Titanic. The guy operating the lift listens to his earpiece which tells him the state of play above.
‘Sorry for the wait. It’s choca above. It’ll be a few minutes’.
I get a real Titanic feeling washing over me. We can’t move forwards or backwards. We’re stuck waiting for the lift to rescue us. I wonder if this is deliberate.
‘No worries, as long as it’s safe’ I say laughing.
‘Yes’ he chimes in twinkling. ‘I find if you mention health and safety here, people are very understanding about the delays’ and he laughs.
We take a shipyard ride in a car that fits all seven of us. We fly through the shipyard experiencing the sights, smells and sounds of the construction. A big hit all round. The other favourite bit is when we get to sit down to a ginormous screen and experience the actual ship at the bottom of the ocean. 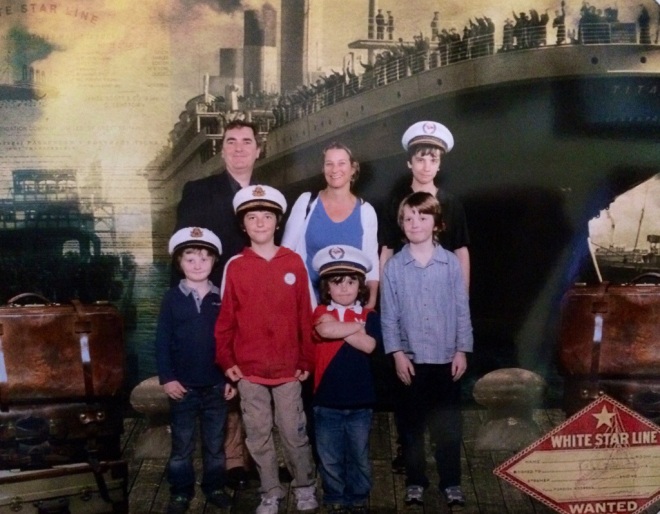 Our taxi driver delivers us back to the centre for some last minute shopping. The kids have ten pounds each to spend. It is the spending of this different currency which will stay with them. They hit the pound shop and emerge with bag loads of thrilling junk. They are orbital. We are leaving it tight for the train back so we flag another taxi to the station. Head count. All in. All smiles.
‘I want to be the first to say it. Thanks Mum and Dad’ with echoes of same all round.

We made it. Banter with the taxi driver about options for our next trip. The Odyssey Arena. The Transport and Folk museum. Yes, yes, we’ll do it all, our newly empowered traveller selves say. We are alighting from the taxi. ‘Careful guys’, I say,’don’t trip on the seat-belts, quick, onto the path’ and I pull the sliding door at the same time as he is closing the passenger door and somehow he is standing there with his finger retrieved, bleeding, in agony, white as a ghost. Fingers in doors. It’s one of our pet dreads.

In the blink of an eye it can change for any of us. Almost there, almost safe, wham. And that’s what we bring from our adventure above all. A thankfulness for the luck that we’ve had to date. An added vigilance for ourselves as well as the kids.

As marque 2 put it: ‘I had a feeling that something might happen to somebody today, but I didn’t expect it to be one of the parents’. Thankfully the finger will recover. And we will venture on unperturbed to other pastures. After all, marque 1 tells us it was one of the best days of his life.