There are secondary school tests which will determine levels ahead. There are primary school tests for reports which will be passed on to the secondary school. We’re raising them not to be too anxious about these things. Then in the wee small hours I pray for a bit of anxiety to be instilled in them. A little tiny drop to set the adrenalin pumping. Theirs. Mine pumps away on their behalf. If I could inject a vial of mine into them then maybe…

They’re doing exactly what we’d hoped for them. Enjoying their interests and aptitudes, having fun and being unperturbed by the competition that looms around them. And yet.

Marque 3 sails out of school today announcing he had his summer maths test.
‘Were you supposed to study for that?’
‘Ah no, you can’t study for a maths test. You can’t really study for any test in third class’.
Marque 2 has a similar attitude to his 5th class ones. I was astonished to discover that there is a revision list detailing exactly what to cover for each subject. He is unshaken. He reckons he knows all the stuff pretty well without the need to go over it. He tends to get away with it too. Last year as he approached the tests without a drop of sweat I was sure it would be reflected in his report. A little lesson that would serve him well. I hinted as much to him. Then his best report ever lands at my feet one sunny July morning. The lesson learnt was that mother does not always know best. My ‘told ya so’ moment turned out to be his. Oh well.

‘Ah, that’s because you have all boys’ I’m told when I relay my laid back approach to the studies tale. The girls just get on with it apparently. I’m averse to gender stereotyping, but it’s everywhere and we’ve been at the receiving end of plenty of it over the years. Blithely removing individuals from the conversation and casting an all inclusive sexist net. The more kids we had the more bizarre it became. The comments and the free reign blind assumptions. But they are are all so thoroughly different I’d scream silently.

‘All boys?’ strangers would ask with a subtle shake of the head, a ‘poor you’ intimation, an ‘oh well’ sigh. Or sometimes they’d come straight out with it.
‘I feel sorry for you. If that was me I think I would kill myself’ a sage mother (unknown to me) said shortly after the birth of my third. She had a son and a daughter. She said she’d love to have a third. But only if she could be guaranteed another girl. Stuff rattled in my head. Stuff that ought to be said. We consider ourselves very lucky, but thanks for the concern. Maybe you should stop at the two then. Save yourself the disappointment. You haven’t even met my children. How can you possibly comment? As luck would have it some years later her daughter ended up in play school with marque 3. She developed an acute crush on him and expressed this to her mother who dutifully informed me. ‘It is so funny, she is really very serious about it – she wants to marry him’. Not on my watch sweetheart! But then again if I kill myself like you kindly suggested, she’d be in with a chance!

The skin grew thick to the comments in the early years. At first I found myself flying the flag high for boys. Trotting out how much fun they were, how positive and zesty and affectionate and hilarious and by doing so I was really joining the polarising boys versus girls discourse which I didn’t like. By defending so much I was doing everyone a disservice, boys and girls. I found people agreeing with me, defending away, ‘yes give me boys any day, much more straight forward than girls. I know someone who had four boys and then a girl and she says the girl was all the work…’ I dropped the flag. These are all individual children, all different, no generalisations necessary, thanks.

However the consumerist polarised marketing of boys versus girls – a money spinner – has been irksome over the years. We have found ourselves purchasing a pink padded flicker scooter, a pink/purple framed blackboard and a pink kids’ camera as the boy colours were out and the birthday deadlines were up. Even some of the technology comes in thoughtful pink or blue. For heaven’s sake. When I read a newspaper article citing the compulsory removal of girl themed folders from the stationery shelves of a large supermarket chain – due to an anti-boy slogan – I was sadly unsurprised that there were such items. Complaints had been made. At last we’re waking up I thought. 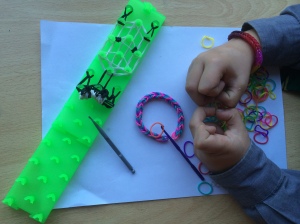 There seems to be a change looming – in the form of the loom band craze – and we’re embracing it wholesale. This sees boys and girls equally industrially employed weaving bracelets, necklaces and rings from multi-coloured bands and flogging or trading them in the school yard, or giving them as presents to family and friends. The boys are wearing the products – and yes even if speckled with pink. At last and long may it continue. An accidental maturity in the marketing perhaps with great bonding benefits across a largely socially constructed gender divide. Roll on the next gender neutral craze and fingers crossed we see an end to pink versus blue.

Follow Airplane in the Sitting Room on WordPress.com
Join 38 other subscribers